Fawn Le Sombre has release on his Facebook page a new Pangya updater/launcher which should work with any private server: 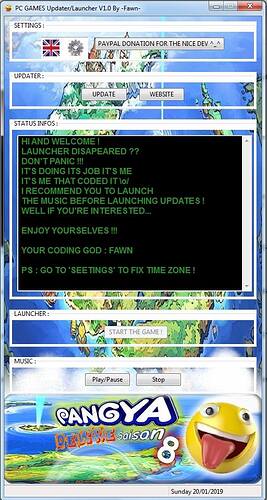 Hi ! I made an updater/launcher : -Full FR/ENG Client be sure to read README files and USER GUIDE to understand how to use it. Originally built for Pangya, i made it adaptive to any game/server....

The updater looks fine for basic setups, as it just downloads files and replaces them.

If it was for me, I’d probably build an updater that supports Pangya updating mechanisms, like the updatelists, which the game also checks on upon starting up, I believe.

Making a CDN that just follows the official way how updates are delivered also enables official updaters to work fine just with redirecting the URLs to another servers over host entries for example.

You can also still use the PangyaUS updater because of this, for that matter, as the files are still online.

Indeed, such an installer would make things even easier. If I understood cor’rectly, you have to manually enter the URL where the update is located. It would be nicer if you could just select the server where you’d wish to play on from a pulldown menu, so that you could select the most populated server. I don’t understand what is the timezone used for in the updater.
As for the PangyaUS files, I’m secretly wishing that the server is actually still up, although not officially, and that all that’s needed is to change a setting in some .ini file. I’d love to see again my account and my characters

Well, the game server is down, or inaccessible.

The CDN, which has static files like updates, announcement banners and GameGuard on it still functions, probably just an overlook when GameRage shut everything down, which benefits us, as being able to backup the GameGuard files is crucial to having the client run properly.