I am trying to use PangLib.IFF I have exceeded in getting use it
Seeing that this is not easy.
I tried to update the data reading as:
Part
SetItem
Item
QuestItem
CaddyItem
and others

but it seems that does not understand well how they do to read the files, for me it is not so easy to manipulate

I tried to modify the classes

yesterday I was able to play PangLib.IFF
I have used it the way it came, I am facing doubts because of the public struct since I am a low level developer and I have not dealt with this type of class knowing it is the same
public class

I’ve done the IFFTest works and read
but it seems that iff Manipulator does not load all iff
only charges 1 at a time
different from my friend, it reads and keeps the data loaded and returns when requested
but Andy’s IFF ready is good, but needs a good fit for everyone to use

First of all, thanks for using my toolchain!

If you want to add more IFF file types to get parsed, you need to do the following:

Speaking of that, as I recently found out that the int32 present at byte 4, which I previously assumed was just a “magic number” (a lot of people talked about it that way), is actually a version. This is prevalent when you try to parse a Pangya JP Season 8 file using PangLib.IFF, which doesn’t work, because the common structure (the first few fields like name, level, etc.) have changed. So I need to add version specific IFF file structures to the whole library as well.

I also want to refactor the library as a whole and instead of having the library “guess” what type the file has, have the user specifically choose it, I imagined something like turning the library generic, so

where the developer has to pass in the DataModel, so unclear stuff like using the List<object> Entries can use the actual type and developers don’t have to cast data before being able to use it properly.

Also, as noted in the README, you currently cannot save back IFF changes into files, but as part of the refactor, I’m working on this!

thanks for the reply
some people may find it difficult to want to test
why the IFFFile class had changes
to get a chance to be used with some app running PangLib.IFF

Yeah, maybe I need to clarify that a bit more, but in general for the library it works like so: One instance of IFFFile is for one file specifically.

People themselves can build a library that loops over all files in a folder and create several instances, that shouldn’t be too hard! I’m just giving (simple) developer tools.

Most of those are really in it’s beginning stages, but I try to make them more usable and easier to understand over time!

thanks for information xD

Just as a notice, I updated PangLib.IFF a lot over the past day!

Here an example of loading Character.iff, changing Nuri, the first entry, in it and saving it to Character2.iff:

Now the main task left is adding all data models, and also versioned data models for the different region versions so everything can be parsed properly. The base library is fairly solid now!

This is a modified version that I did contains part of the codes quoted in this post, original codes still belong to the Creator.

will load all iff quoted in the FileName of this folder
var IFF = new IFFFileManager (“data //”);

however unfinished and incomplete is version
still not figure out an easy way to do it works
but it’s quite simple, you can get more accurate data
you just need to use
Exemples:

I quickly spun up a prototype that I didn’t test, but this should work, without adding a lot of custom code to what I have written so far: https://gist.github.com/pixeldesu/3d6d5dc9a62376d651d2b3bc25cd9134

That would be way cleaner, wouldn’t it?

I tried solving it without the switch..case but that would require generic type inflection and I really haven’t done that and my quick experiments on it didn’t work.

oow, would this be a new version?

yes, allowing a query on the loaded data much faster and less codes, everything is viable 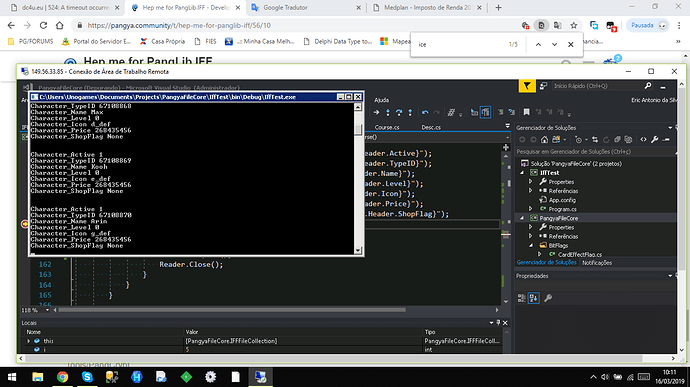